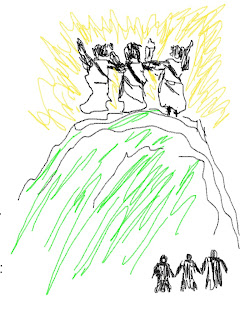 Today, August 6,  the church celebrates the Transfiguration, when Moses and Elijah joined Jesus on the mountain to talk about Jesus last days. There is so much beauty in this story for every character, but mostly because Jesus, for  a brief, shining moment glorified on earth. I wrote Only Jesus in honor of this day.

They climbed a mountain just to watch Him pray,

Peter, James and John fell asleep along the way,

Little did they know it would be a gospel day,

For the glory of the Savior was revealed that very day,

A flash of light awoke them, and to their great surprise

Moses and Elijah were standing by His side

While talking of days ahead, His journey to the cross

He changed into a glory that made the world seem lost.

But the kingdom he was seeing wasn’t built by human hands,

Yet love started building in Peter’s heart that day,

For God’s law and His prophets merged into the Way

Before their very eyes, God’s kingdom had appeared

And even God the Father, joined in with His cheer

“Listen to My Son, for His Life I have ordained”

And when the Glory lifted, only one could still remain.

It was Jesus, only Jesus,

The vision of the prophets and the answer to the law.

Is the very face of God.

So thank you Lord, for Moses and Elijah, too.

But most of all for knowing they would never do.

Their laws and their visions showed us how to live

but to save a soul as lost as mine, it took all You had to give.

It was Jesus, only Jesus,

The vision of the prophet and the answer to the law

Is the very face of God. 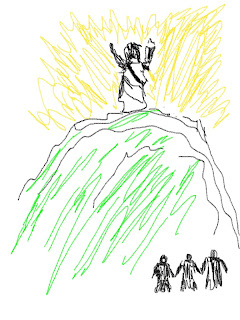