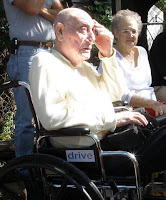 I was fortunate when I was growing up to be surrounded by strong male figures, my Dad, Granddads and Uncles. In my little girl’s perception of life, they stood as heroic figures of working men. I never wondered what truck drivers or mail men or preachers or soldiers or cowboys or deacons or firemen were like. I saw them every day. I saw them take care of their families, work in their churches and stand up for what was right in their communities.

My Uncle Ewing was the fireman. The fact that the dangers, that went along with the job on the streets of Dallas, were never really spoken out loud at family gatherings only made them more real to us. As children, we focused more on the adventure and excitement that went with the lights and sirens than the actual work that went with handling water hoses and fighting flames.

Uncle Ewing ruled the 4th of July. This was, of course, before the community firework extravaganzas we experience today. If you were going to have fireworks, you did it yourself. We always had someone in the family who lived out in the ‘country’ and hosted the family’s 4th of July celebration. As our fireman, Uncle Ewing would decide if the conditions were okay for the evening’s fireworks. Was the wind blowing too hard? Was the grass too dry? As kids, we would tip toe around him all afternoon, trying to honor his authority, yet hoping, deep in our hearts, that he would announce,’ Yes, we can have fire works!’.

On those ‘favorable’ years he would supervise the other uncles as they set up and ignited the fireworks. From as much of a distance as he could manage, we would be in awe at each shooting star or Roman candle. As an adult, I can only wonder how hard it must have been for him to do something that could so quickly start a fire. We could sense his reluctance for the fireworks (even if we didn’t understand it.) Yet, his willingness to do it anyway, because he loved us, gave birth to a true hero.

At these family gatherings, my elders would gather in the evening to resolve the world’s problems. As I remember, Uncle Ewing would speak with reason. He has a deep, mellow voice that brings calm. I always imagined that it was exactly the right kind of voice to carry through a dark night of fire and smoke and to bring welcomed instructions to other firefighters.

From Uncle Ewing, we learned simple things like tattoos might seem exciting, but years later, you regret your youthful indulgences. Or, it is okay to sleep in the nude as long as you don’t mind being carried out of the house naked by a fire fighter. The thought of Uncle Ewing coming through the fire has kept me in PJs even on the hottest nights.

In the mid 70’s, when Uncle Ewing retired, we thought he had answered his last fire call in health. And for many years, he was able to enjoy golf, his grandkids and now his great-grandkids. However, the ravages of being a ‘smoke eater’ have become real. Years of toxic fumes and intensive heat created skin and breathing problems for him. Now, in his 80’s, he is on oxygen full time. Recently, he had a really low spell. The doctors had nothing encouraging for him, but he rallied. This weekend, we were glad when he felt well enough to attend our annual family reunion. I watched him sitting in his wheelchair, holding his oxygen bottle in his lap, and grateful to be with his family again. There in the sunlight, his inner priorities of God, family and community showed through his outer appearance. I knew he was still a hero to me.